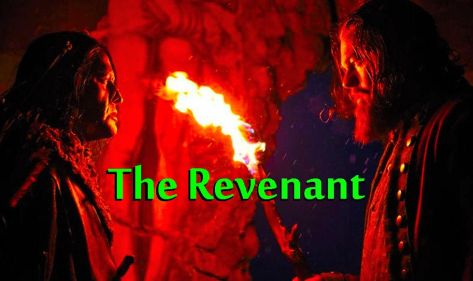 Arthur Redcloud as Hikuc, a Pawnee on his way to the Kitkahahki

Watching The Revenant do so well at the Oscars tonight, I feel a sense of complicated pleasure.  It is a film that visits a newly imagined version of Pawneeland.  The award-winning cinematography summons up a mountainish world that feels like a real place.  But it isn’t; not really.  What matters most to me at this moment is that the film features a number of Pawnee characters, a range of roles – this is rare for films that have touched on Pawneeland in recent decades.  And those Pawnee characters have been finely crafted, nicely acted.  Believable and human.

In all of its extravagantly crafted details The Revenant aims at a specific visual texture that the director has termed “authenticity.”  The purpose is for this film to suspend us in the midst of a story that feels propelled by history.  We are not to worry much about trying to sort out history from pseudo-history.  Entering the theater, we already know it represents a rewritten past.

The Revenant was carefully designed to resonate with present-day racial storytelling, not with history.  But we are encouraged by the rich detailing to equate this kind of story with history – a past that has racial Indians oppressed by racial whites.  Hugh Glass serves as the moral compass.  We, the audience, peer through his eyes.  We hope for guidance toward our most uplifting contemporary multicultural values.  What we demand from pseudo-history is something more real than history.

Many Pawnees today are descended from French-American fur traders from St. Louis.  The residents of St. Louis were very diverse, dominated by French ancestry from Canada and New Orleans.  The ties of the St. Louis families to Pawneeland were deep by the 1820s.  In fact, Pawnees could be found there as residents not long after the founding of the city.  If you have St. Louis ancestors going back to circa 1770, it is likely that you have Pawnee ancestors.  There was no endemic warfare between the Pawnees and the St. Louis French-Americans.  Nor were there ever any assaults on Pawneeland by French or American military forces.

But in early June 1823 the Arikaras did attack an American trade expedition on the Missouri River – this was an American group that included a good number of French-American traders.  And an American military expedition did subsequently lay siege to an Arikara earthlodge city; they shelled the city by cannon-fire.  They were accompanied and assisted by a large Sioux military force – along the Missouri River the Sioux were the first military allies of the Americans.  A complex set of evolving relationships between the Arikara, Sioux, and Americans drove these events.  It is impossible to frame this history as a racial rivalry of “Indians” versus “whites.”  To accomplish this impossibility, The Revenant twists all of these details into an entirely new configuration of the past.

During the 1820s race was still a new idea in Pawneeland.  The Pawnees had a long way to go before they would become full-fledged “Indians,” before they would completely absorb the tenets of racial identity systems.  But the obscure and elaborate and simple historical mechanisms of race… this topic is not the primary theme of The Revenant.  It really has to do with surviving an implacable narrative of social violence, a tale fraught with the mechanisms of war, vengeance, and slaughter.

In this movie, in this re-imagined Pawneeland, one must kill or be killed.  And so, even though the Pawnees come across as humanized in the film, and even though this happens in a way that we haven’t seen in other films, all the Pawnee characters get murdered and massacred.  That is, with the exception of one ghostly starving woman who survives, maybe.

Tonight I’m glad this film won a few awards.  I’m glad for Pawneeland.  I’m pleased to find a film contemplating a version of that world.  It does matter when historical narratives get rewritten to suit film-narratives, but it is true enough that the complexities of history are sometimes not as real as the appeal of pseudo-history.  Tonight, I suppose, feeling pleased that a film with Pawneeland at its heart has won Oscars for cinematography, best director, and best actor, perhaps it could be argued that not everything that is important in our storytelling is necessarily real.  Not really. 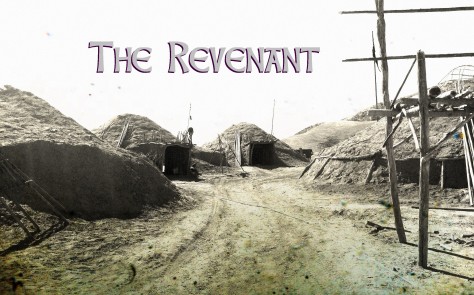 I saw The Revenant yesterday.  My overall impression… I guess it was as if I had visited the ancestral world that would eventually give rise to the world of Mad Max.  Fur-clad protagonists who wallow in the churning machinery of savagery will surely give birth to futuristic protagonists wallowing in the slow-motion disintegrating machinery of slaughter.  The Revenant and Mad Max imagine very similar worlds.  A brute grotesque vision of humankind.  Dark dystopian fantasies.  Parched outbacks and snowbound mountains provide the mythic vistas that generate one epic downfall after another.  The savage people.  The savage animals.  The savage guns and gears.  We find ourselves cast into sand storms, furiously gritty, and into rivers, furiously frigid.  But we who enter such realms… we must endure scene after scene until the end comes for us all at last.  When you leave this kind of theater, don’t bother looking back to ponder the bloody footprints at your heels.

But The Revenant was nice, in a way.  It was wonderful to see cinematic Pawnees who were not murderous, who were not bent on terrorizing the innocent.  Hugh Glass is given a sweet Pawnee wife – an anonymous dreamlike Mrs. Glass who floats in & out of the movie.  Hugh misses her.  It is terribly sad, the way she was murdered by unhistorical soldiers who senselessly savage a Pawnee city in an unhistorical massacre – it never happened in actual history, but it is a moment that fits seamlessly into our preferred pro-race mythmaking.  And they have a son.  “Hawk” is quite a well-chosen name – very common for Pawnee boys of that time.  Hawk loves his father.  He is loyal and caring and a little sad.  He is so easily murdered in this dark fairytale. 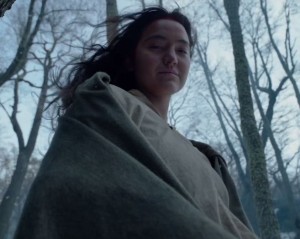 Such humanized Pawnees are strangely absent from cinema.  Not long ago I noticed a few Pawnees in The Homesman, a 2014 film by Tommy Lee Jones.  When those Pawnees ride into the movie, the homesman grabs all his weaponry.  He wisely hands a gun to the woman he’s traveling with, and he counsels her to blow her own brains out if he doesn’t survive the coming desperate negotiations.  To fall into Pawnee hands… too horrible!  And I haven’t even mentioned the nightmarish Pawnees of Dances with Wolves.

I long ago read a book by John Myers Myers about Hugh Glass and I always felt suspicious of his colorful tale – the part about Hugh Glass living among the Skidi Pawnees.  That particular twist was based on notes made from interviews with a fur trade employee named George Yount.  Seventy-some years later those interview notes were gathered, edited, and published, and I have no idea how those filters affected the story told by Yount.  But the way the account framed Pawneeland has always felt to me like artifice warped for dramatic effect, not like history.

Perhaps Glass knew the Pawnees.  The fur trade was very active in Pawneeland for decades before 1825.  American fur trade corporations centered in St. Louis typically sent expeditions to Pawneeland to set up shop in the different cities.  The association of Glass with the Skidi Pawnees was just a speculative interpretation of the Yount tale – a hyperventilated twist introduced by Myers.  I don’t see how it is trustworthy in any way.  The Yount / Myers tale has Glass as a prisoner who wins his way into the hearts of the Pawnees.  But by the time Glass happened onto the scene, it wasn’t like he could have been held in a secret Pawnee prison for months or years.  Pawneeland wasn’t really a realm that teetered at the mysterious edge of everything else.  It was instead a close-knit alliance of four Pawnee sovereignties that had long before become interlocked in the global patterns of commerce and politics and intermarriage.

It is a shame that The Revenant makes us believe in its exquisitely detailed version of the past, its compelling Mad Maximum narrative truths, the frenzied whiplash thrills of maybe having to chop off a few fingers for good wholesome reasons, the next vastly defining moment of blood lost forever in endless snow.  Despite all this gruesome drama, we are somehow wafted into a haunting world.  And this is the first movie that has ever happened in my lifetime that shows Pawnees as people… And yet, well, it seems a shame.  I find myself wondering… will I ever want to visit that version of the world again? 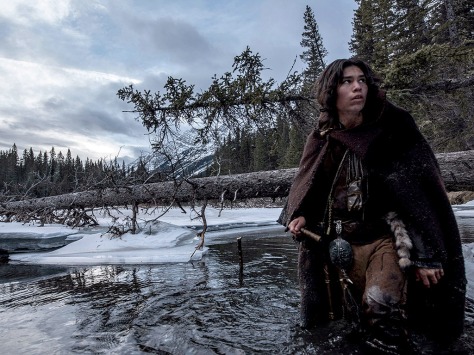