Wyoming felt as if it had always been waterless, profoundly arid.  A parched specter of a seafloor slept unconscious at the bottom of an ocean of sunlight.  Nothing moved from horizon to horizon.  Not even the wind moved.  It stood there in Wyoming looking back at very faint footprints stretching back to the greenways of Nebraska.  Why had it come here, anyway?

Driving through this land last Friday afternoon, I wondered what manner of folk had ever walked here.  Who had sat upon a horse and ridden across this arid thirsty world.  Why would anyone think to get into a wagon and say, “I think I’ll drive this thing across Wyoming in the middle of another scorching summer!”

A lonely antelope stood motionless beside the road, standing next to the motionless wind.  It was thinking, someone decided to put a road right here, hoping that people would someday find it and plan their day around driving down it.  Look!  There goes one of them now!  I turned up the air conditioning until I could feel it wafting across my arms.

I stopped in Kearney, Nebraska.  The next morning I found my nephew sweeping out the Arikara-Pawnee earthlodge;  Bob Frazier and his girlfriend Jazmin Lorentz helped to build this earthlodge in 2010.  The Great Platte River Road Archway sponsored the project under the leadership of Ronnie O’Brien, Director of Cultural Education.  The presence of this earthlodge – built by Arikara and Pawnee volunteers – reflects the recent return of the Pawnee Nation to our ancient Central Plains homeland.

The day was warm already, but the interior of the earthlodge felt cool.  A traditional solar lighting panel (a hide stretched on a frame) lit the interior.  Bob moved it every so often to keep it positioned under the sunrays that fell upon it from the smoke hole.  I spent several hours talking with him and Jazmin about Pawnee history and earthlodges.

It was a very large earthlodge.  In a Pawnee earthlodge city of circa 1850, a structure this size would have been built by one of the leading families to double as a ceremonial sanctuary.  In The Lost Universe Gene Weltfish describes the kind of ceremony that would have happened in an earthlodge like this.

The Skidi Awari Groundbreaking Ritual occurred in the spring after the first willow leaves appeared.  Women played a central role in this ceremony because it signaled the germination of life in seeds and provided a religious context for the spring planting of corn and other crops.  Weltfish offers an interesting note on the name of the ceremony:

The term awari is a compound stem, the first part a- signifying “being” or “living” and the second part, -wari, to go actively about, such as traveling.  The Pawnee used this stem as we do “up and about” meaning to be in good health.  The combination awari indicates the principles of life and motion… the vigor of life.

The idea is that independent motion signifies the essence of life, the life force that exists in the universe.  The Awari Ceremony offered an organized way to express respect for this life-force.  Life moves in seeds and they germinate and a living plant pushes up into the sunlight.  The mystical connection of life and motion beautifully articulates the spiritual mystery that links us all with living things.  We move; we live.

The traditional Pawnee concept of the origin of life is that it flowed into things from a form of celestial spiritual energy, out of Tirawahut – a divine life-force that was not anthropomorphized into a human-like god but was instead envisioned as a kind of vastness in the heavens.  Life exists as a consequence of this invisible mysterious life-force.  It slowly surges throughout the universe, powering the celestial motion of all the stars and planets and all the living things of the earth.

Later that day, driving back to the far western edge of the ancient Pawnee homeland, I kept thinking about things moving.  In Nebraska the highway ran alongside the Flat River across old Pawnee hunting regions full of flying birds and wandering animals – a slender living greenbelt made its way across the middle of the Plains.  Getting out of my car in Wyoming, now the wind blew across this bleak corner of the world.  It wasn’t lifeless.  Just arid; a living expanse filled with its own kinds of mysterious motion. 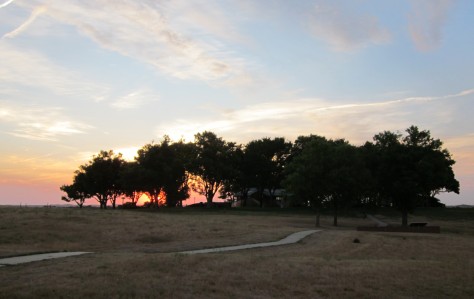