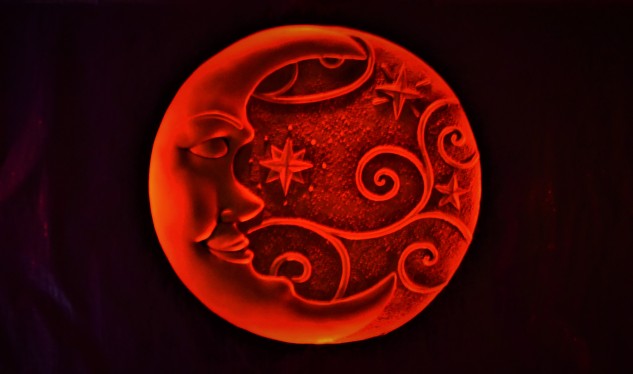 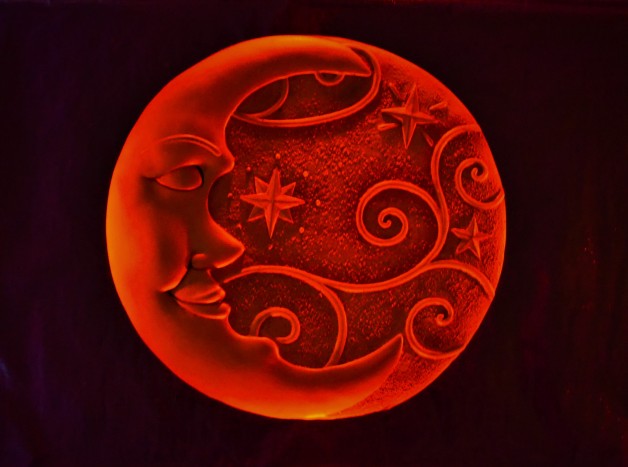 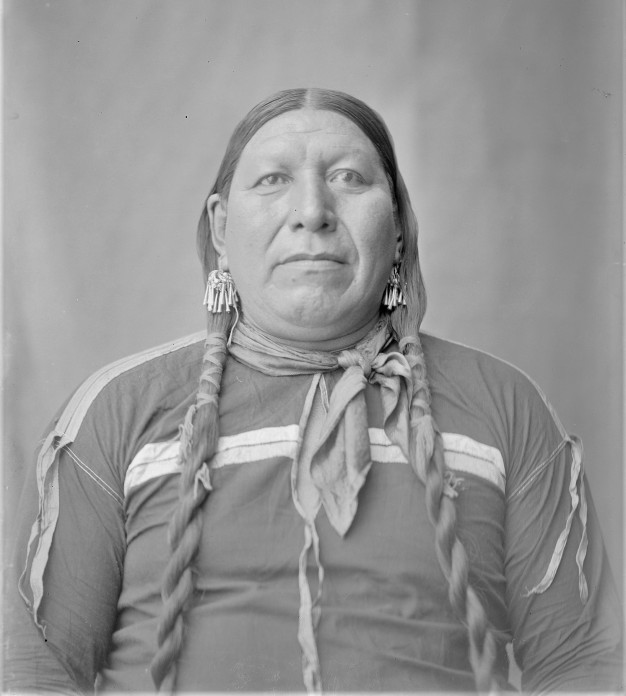 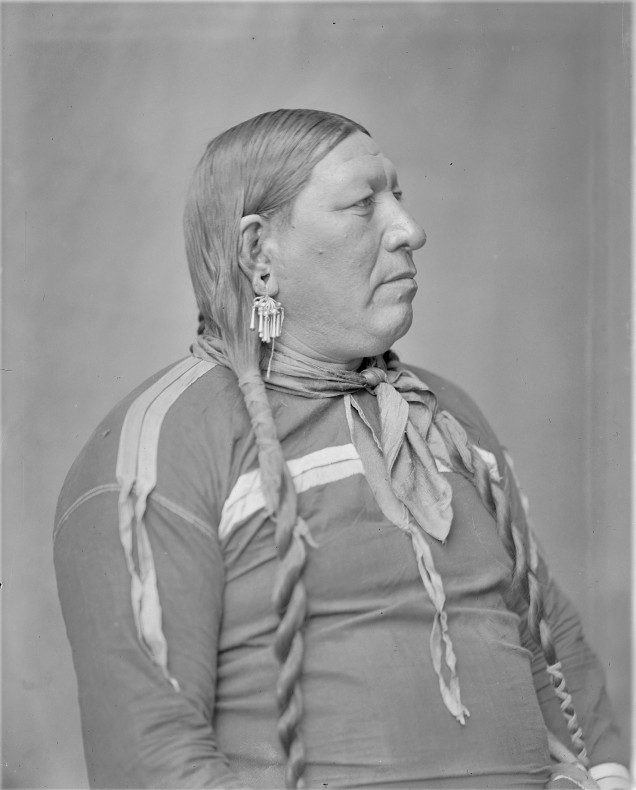 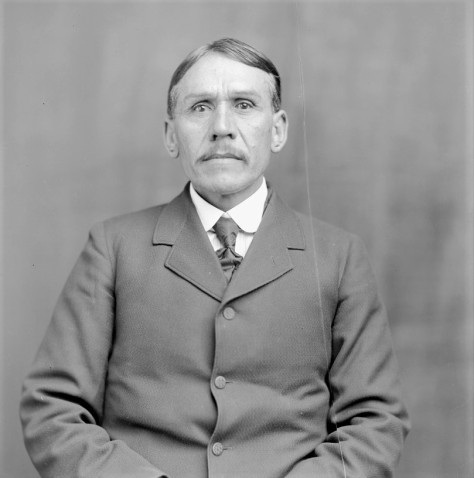 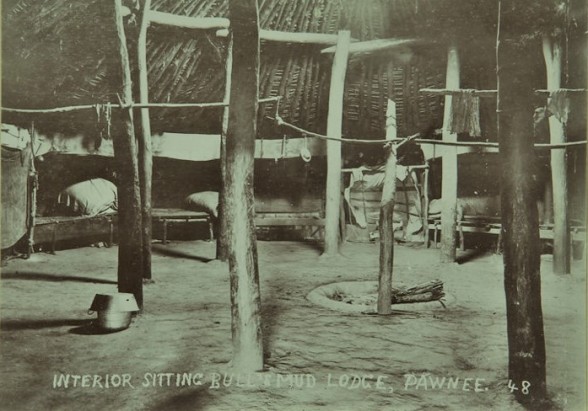 It must have been in the early 1890s when photographer Thomas Croft visited Pawneeland.  Using glass plate negatives, he took two photos of an ákaaruʾ (earthlodge) built by the family of Sitting Bull.  One photo shows the exterior of the house.  Several hundred photos of Pawnees must have been taken during the 19th century, and perhaps twenty or so show earthlodges.  But I can’t think of any that peer into the interior of an ákaaruʾ.  So I was quite interested to recently find online a photo taken by Croft inside Sitting Bull’s earthlodge.  It is apparent that he set up his tripod at the inner end of the hiwata or íwatuuruʾ – the extended entryway.  So we must be looking at the uúkatat, “hanging at the west,” the west side of the earthlodge.  This is usually where a sacred bundle would hang over the altar.  In this photo, against the far wall we see a canopy structure.  And a dark shadowy object sits atop the frame of the canopy.  It is difficult to make out any details, but one spot of light might be a gourd rattle.  Perhaps this is a sacred bundle, a Cuʾuhreereepiiruʾ, Rains Wrapped Up.  Under the canopy we can make out what seems to be a bison skull resting on a pedestal.  These are very intriguing details.  But I am also interested in the itkatahaaruʾ, the “place of the fire.”  We can see that it is collared with an earthen rim.  This feature holds esoteric meaning, ancient symbolism (see my book The Enchanted Mirror: Ancient Pawneeland, p. 100-101).  Earthlodges constructed in more recent years have been built as exhibits, and these don’t have collared hearths.  But this feature connects Pawnee earthlodges to antiquity, to long-forgotten religious ideas about heaven and earth.  And it is no wonder that this hearth had a ring built around it, because Kiwikutiwitit (Sitting Bull) was a Chaui priest.  He was born about 1830.  He grew up at Marsh Town, a Chaui earthlodge city on the Flat River, and he studied to become a doctor, and he served in the Pawnee Scouts, defending Pawneeland against the implacable invasion of the Sioux empire.  After the Pawnees moved to Oklahoma, many people fell ill and Kiwikutiwitit doctored people in his tent.  He had two wives then, Stay kee lah wee rah and Chee sah hee rah sah.  And south of the Pawnee Agency they built an earthlodge.  It might have been around 1890 when Kiwikutiwitit took the name Tahirasawica’, He Arrives In The Lead.  In Echo Hawk family tradition Tahirasawica’ was known for treating broken bones.  In 1982 one of my uncles told me that after the reservation opened in 1893, a new American neighbor brought his son to Sitting Bull’s earthlodge.  The boy had a broken leg, seriously infected.  It needed amputation.  Sitting Bull told the farmer: “You must let me have this boy for four days, and perhaps I can help him.”  That youth stayed in the earthlodge shown in the attached photos.  And whatever life he lived ever after, when he walked around in his world he surely thought of how he left the ákaaruʾ of Sitting Bull with a mended leg.  I would guess that this story has endured in my family oral tradition because it tells an important story, reminding us that the Pawnees dealt honorably with their new American neighbors when they needed help.  And Tahirasawica’ was more than a doctor; he was also a priest.  He conducted the Chaui Pipe Dance, a ritual filled with dreams that happened long ago in an ancient realm.  There the priests of antiquity invented the Pipe Dance, and folk began to live in earthlodges.  And in the fall of 1898 Tahirasawica’ traveled to Washington DC and he shared with anthropologist Alice Fletcher the songs and rituals of the Pipe Dance.  And Fletcher came to Pawneeland in the fall of 1901, and she visited the earthlodge of Tahirasawica’: “I saw how he had propped up a part of the ruins of his lodge,” she wrote, “so that he might still keep the sacred objects in a primitive dwelling.”  He said to her, “I cannot live in a white man’s house of any kind.  The sacred articles committed to my care must be kept in an earth lodge, and in order that I may fulfill my duties toward them and my people, I must live there also, so that as I sit I can reach out my hand and lay it upon mother earth.”  And in those days long ago the Pipe Dance slowly drew to an end.  The ákaaruʾ of Tahirasawica’ slowly fell into ruin.  And about 1908, one day long ago the old man reached out his hand to touch the earth one final time. 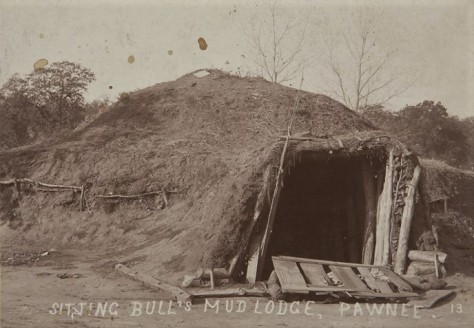