In my 2013 book, Tolkien in Pawneeland, I shared with everyone a strange realization.  I argued that scattered details in JRR Tolkien’s Middle-earth legendarium originated from Skidi Pawnee mythology.  This insight soon led me down another path – I wondered about Tolkien’s attitudes and notions concerning what he termed “Red Indians.”  Eventually I began to investigate the fact that he drew on the traditions of race to colorize his orcs for The Lord of the Rings.

With such thoughts in mind, at moonrise on the last day of July 2015, I set forth for a certain city in the south.  A giant blue moon stood sprinkling silver light down on the eastern horizon.  Arriving late that night, I soon found myself wandering among Gormenghast-like corridors in a sprawling hotel complex.  Here at the edge of the ancient realm of the Pawnees, at the feet of the Mountain That Touches the Sky, the folk of the Mythopoeic Society were gathering for Mythcon 46. 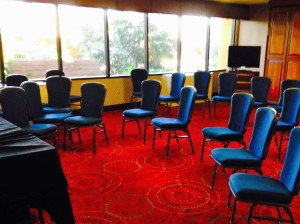 The next day, Saturday afternoon, I read my paper on Tolkien’s racialized orcs.  The Mythcon organizers gave me a small meeting room that overlooked green treetops and a swimming pool full of the dim cries of splashing children.  Twenty or so people attended my session.  They had to forego the other two sessions – a panel on “Reclaiming Tolkien’s Women for the 21st Century,” and a paper by Peter Oas on the making of Galadriel.

The panel emerged from the publication this year of Perilous and Fair: Women in the Works and Life of JRR Tolkien, edited by Janet Brennan Croft and Leslie Donovan.  This collection of essays was prepared “to remedy perceptions that Tolkien’s works are bereft of female characters, are colored by anti-feminist tendencies, and have yielded little serious academic work on women’s issues.”  I wish this volume had included some detailed consideration of a long letter Tolkien wrote in 1941 on women, sex, and marriage, but the essays shed much interesting light on the women characters in The Lord of the Rings, and I’m sure that the session was enlightening.

I have the impression that the Mythopoeic Society sees itself as a companionable participant in the social agenda of the Tolkien Society – a dedication to “promoting the life and works of JRR Tolkien.”  Pondering Mythcon, the Mythopoeic Society, and the Tolkien Society, I sense a culture of amiable shared values.  One important shared value has to do with the bonding experience of defending Tolkien and Middle-earth fandom from unwarranted negative criticism.

Given the nature of my paper, I didn’t necessarily think it would be welcome at Mythcon.  In the vast field of Tolkien scholarship, not much deep thinking has materialized on Tolkien’s use of a racial stereotype in modeling his orcs.  This topic has been widely acknowledged.  But much of the commentary I have seen strikes me as shallow and dismissive.

The racialization of Tolkien’s Mongol-type orcs stands in apparent contrast with his well-known hatred of racism.  Most commenters seem to think it is impossible to reconcile these polarities, and so it is common for Tolkienists to embrace Tolkien the hater of racism.  My research shows that he sided with his academic peers on race, but he also accepted mainstream British attitudes on race.  The friendly folk who attended my talk seemed plenty energized by what I said, and they were delighted to share their own thoughts.

Kris Swank appeared at my session.  And the first thing she said was that she had attended a marvelous presentation on race that morning.  “If they come here, I’ll introduce you!”  Stephanie Brownell and Sara Rivera very much wanted to attend the main event next door, the panel on Tolkien and women.  But they decided to hear my paper instead.  That morning they had given a paper on race, “‘Out of Far Harad’: Myth and ‘Mirror’ in The Lord of the Rings and The Brief Wondrous Life of Oscar Wao.”

Their program abstract sounds fascinating.  It considers the mythologizing of Middle-earth in the Dominican Republic – the equating of “the despotic Trujillo with Middle-earth’s dark lord…”  And they suggest that mythopoeic literature “has unique potential to create new dialogues bringing minority characters ‘out of Far Harad’ and into the center of narrative and discourse.”  I wish I had attended.  Chatting with them, they said my paper and their paper overlapped in pondering the making of race during the early 20th century.  As we talked, we touched on the groundbreaking research of Dimitra Fimi and Margaret Sinex.

The mention in the Brownell / Rivera abstract of Far Harad is a reference to the sole explicit appearance of racial black people in Tolkien’s novels – a battlefield listing of “black men like half-trolls…”  In my talk I asserted that Tolkien’s black orcs in The Lord of the Rings owe a likely debt to British Edwardian era anthropological reports on the Malay Peninsula.  But as with Mongol-type orcs, the monstrous black folk from Far Harad most often attract a defensive and dismissive tone in the Tolkien community.

I took a blurry photo of Kris Swank giving her paper, “Black in Camelot: Racial Diversity in Historical England and Arthurian Legend.”  She introduced us to various characters identified as “Moors” and “Saracens” in medieval Arthurian literature.  And she surveyed racially identified Arthurian characters in contemporary television and film.  It was a nice introduction to an interesting topic, set forth with wise insights and charming quips.  Coming on the heels of my serious hour, it was great to laugh a little.

I visited with Kris a bit.  She said, “Say hello to everyone at Grey Havens for me!”  And she said she plans to continue developing her research on race.  It will be interesting to know more about the chaotic pre-racial notions of human diversity that ultimately gave rise to the racial social order that so many people today prize so much.  When Kris began her paper, she took a moment to observe that something very special was happening at Mythcon.  Three papers on race.  She suggested that we need a bigger and more inclusive world in mythological studies.

As a newcomer to the doings of the Mythopoeic Society, I can’t speak with much insight about its status quo.  But in my years of encountering such things in various kinds of worlds, I know that the idea of a “status quo” is a cherished and complicated illusion.  The rush of history often washes away treasured boundaries that seem perfectly rigid.

Time may well bring more analysis on various aspects of Tolkien and race.  And Tolkien’s orcs certainly deserve critical study.  People worldwide appreciate Tolkien’s Middle-earth, and a good number self-identify as the modern heirs of old-fashioned racial Mongol-types.  This includes the Pawnees.  I don’t do race in my life, but most Pawnees treasure their racial identities and enact race frequently, and some of them are fans of Middle-earth.

Tolkien declared his rejection of race.  He saw it as a pernicious idea.  But he then went on to racialize his orcs anyway.  We should try to make sense of the fact that JRR Tolkien took various details from a pernicious racial typology to produce monstrous enemies for his heroic mythmaking. 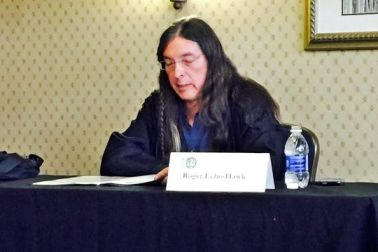 Kris Swank took this photo as I read my paper

That Saturday afternoon, finishing my hour at Mythcon, I knew that no one would object if I stood observing the doings of the status quo in Tolkienland.  But I had done what I went there to do.  Feeling like a guest in the Mythcon house, I decided I had troubled the councils of the wise enough for one day.  I got in my car that afternoon.

Driving away under the lengthening shadows of the mountains, I much enjoyed how the sunset kept breaking free of the clouds, a gentle settling of golden rays among the foothills.  At the darkening edges of Denver, I watched a sudden rose-colored light bloom up from the distant peaks.  In the midst of all that magic, cruising in the far west of ancient Pawneeland, I decided that I did enjoy my visit to the Mountain That Touches the Sky.